Thank God for April and being less scheduled (on purpose, once I realized how overscheduled March was). My dear friend Karen came over one afternoon because she is awesome like that. She touched up my kitchen cabinets, painted trim, put up some hardware, touched up kitchen walls, and was generally awesome. I also put a fresh coat of stain/varnish on the upstairs bathroom cabinets and mirrors, fixed the seal along the tub, etc.

My first at-home productive weekend in a month (a week or two ago) was awesome. I repainted the front door, door hardware, replaced outdoor light fixture, painted the mailbox and address numbers, sanded and spray painted the bathroom light fixture to cover the rust spots, reinstalled it, found touch up paint for the dining room (SCORE!).

Owen came over for a couple hours and removed adhesive from the front siding (thanks to a great prank from many years ago that included a lot of bows stuck all over the front of my house) and did a bit of yard work for me. And then, after my half hour dinner break, I worked on plumbing… actually, I had started in the afternoon… (prepare for a plumbing rant)

In the instructions that come with the new faucet, it reads “2. Removed existing faucet and drain.” Like it should take about 37 seconds to disconnect and then you can move on with steps 3-12 with great ease. It was not to be so at the Homestead. It took me over 2 hours to just disconnect the faucet and deal with the leaking valve. Absolutely maddening. Rekindling my loathing of all things plumbing. And of course, the new faucet needs new connection tubes in different sizes than the existing ones. And… right, I’ll spare you some of the cruddy, scummy, corroded details… (I said “some” not “all”) 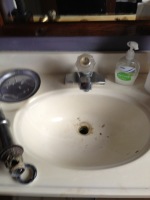 Let’s just say I made a run to Ace late afternoon (because by then Owen was there so I wouldn’t have to just leave the house with the door open since the paint was still wet), I got the connection hoses and a couple parts for the valve issue. After dinner, I went back to the plumbing… and of course, after several more hours, needed another part… after the hardware stores were closed… so I trekked to Walmart in all of my plumbing glory (which included smelling of liquid wrench because I’d been using a lot of it and at one point, while shifting awkwardly around under the sink to try to get a better angle and get some traction on some corroded stuck plumbing, I managed to lay on the spray bottle which promptly discharged it’s smelly contents into my hair — I told you, I’m really good at this stuff 🙂

Anyway, there I was in a desperate state looking for a washer for the drain at Walmart… whose plumbing department let me down big time (no surprise there). I did pick up another set of drain hoses which I realized I would need for the second bathroom faucet. So I stood in line with 30 other people at 10 pm at Walmart, waiting for the two tired cashiers to ring up my stupid hoses… Hoping against hope, I went from there to Meijer, sure their plumbing department is about as well equipped as Walmart… but hoping they might carry a washer to stop the drain leak and be able to turn on the water that evening… please God!!  Gloriously, Meijer had a little package called “Plumbing washers” that had a dozen different sizes (including the one I needed) for $3. Fabulous. And the self scan registers work at Meijer. Leaving there at 11 pm and feeling like a million bucks (and you already know I looked and smelled like a million bucks) I trekked home with my precious plumbing parts.

I finally finished the upstairs bathroom (well mostly, because there was still a slight drip at the drain connection– argh!!) at 1 am. I looked at the other two faucets and figured I might as well just keep going- especially since I knew the other two were going to be simpler since it was only the faucets and not the drains. At exactly 1:59 I finished the other two and turned the water back on so the roommate could shower before work in a few hours.

The next morning at church a couple of my girlfriends told me how impressed they were. “Plumbing isn’t my thing” one of them told me. Clearly plumbing isn’t my “thing” either, but no one else was going to do it, so I had to. Meh. And someday I dearly hope plumbing doesn’t need to be my thing any longer. But for now, I’m done. The faucets look and work great and I hope to do no more plumbing, at least for the next couple weeks (fingers crossed). Oh and I dug the old corroded washer out of that drain ring after Mass, replaced it, and finally stopped that annoying leak. Done. Whew.

This getting the house ready to sell process is kicking my butt. So. Much. To. Do. but it is good to be moving forward. I’m going to be soooooo relieved in a couple weeks when the insanity of the prep is done and it is just on the market.