This past Thursday night was most certainly my first time going to the bar with not just one, but two, three-wolf-moon-shirt-wearing men. You read right. Two three wolf moon shirts around one small table.

Since starting at Neverland (6 months ago), I’ve been part of many, many nerdy conversations. But I think the three-wolf-moon-shirt-obsession may top them all… Thing 2’s friend who works in our toxicology department has one, and I’ve heard many a conversation through the cube wall about the wonders of the three-wolf-moon shirt. Thing 2 recently bought his toxicology friend a dragon moon shirt! They were like kids in a candy store, retelling the story of being at the renaissance festival, seeing the dragon moon shirt – so like the three wolf moon shirt, it’s irresistible draw…

Last week, the nerdiness escalated. Thing 2 came back from his vacation to the U.P. with stories of finding and purchasing his very own three-wolf-moon (TWM) shirt. No joke. He told the story like it was a dream: “There I was in the Walmart, the nicest Walmart I’ve ever been at too, wandering through the aisles and decided to check the t-shirts. It never hurts to check for a TWM shirt you know. And suddenly, there it was, right in front of me, and in my size!!! A woman was standing in front of the shirts and I got really nervous she was going to try to buy my TWM shirt. So I reached around and snatched it. She turned and smiled at me (as if this is a sign that she thought he was cool). It’s so awesome, you should see it.”

Mind you, we (the girls in the hall) poked fun but it didn’t matter, clearly owning a TWM t-shirt truly is some kind of nerdy coming of age. In celebration of said shirt, because we all want to actually see it in action, we went out on Thursday night and Thing 2 wore the TWM shirt. He proudly showed of the “really nice stitching” and the “variegated, almost tye dye background” and the oh so soft cotton it was made out of. It was a proud moment.

And lucky for all of us, his tox friend also came in his TWM shirt. And Thing 1 wore a nerdy transformers shirt. And Red wore a communism shirt. And Bear wore some kind of nerdy shirt but I never figured out exactly what it was for. It was quite the evening. I felt so tame in my “Danger: Shock Hazard” shirt. And yes, I think I may be living in some sort of alternate reality. 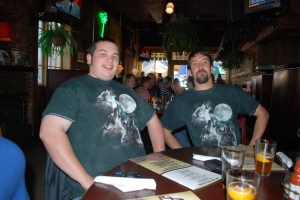 Thing 1 and his wife (gross) 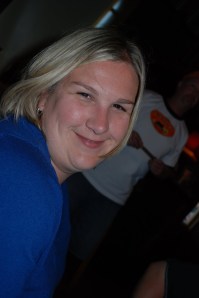 Foo Foo, proudly not wearing a nerdy t-shirt of any kind

And if all of that wasn’t exciting enough, Thing 2 sent me this link … reviews on Amazon about the TWM shirt… and WOW. I’ve only read a couple of them, but wow… Unbelievable. I guess it’s some sort of cult following.

Thing 2’s email: “This is hysterical…not the product for sale, the reviews on it: http://www.amazon.com/Three-T-Shirt-Available-Various-Sizes/dp/B000NZW3IY/ref=cm_cr_pr_product_top” … Thanks for the clarification T2, I thought it was the shirt, though if you read on, the reviews really do say it all. Enjoy.

4 thoughts on “There’s a first time for everything…”